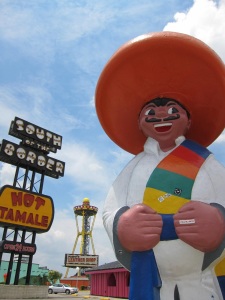 * This is a funny excerpt from my memoir. Hope it makes someone laugh!*

My maiden voyage to find my smile was a road trip with Tiffanie, which wound up being a comedy of errors or bad omens, however you want to look at it. Most outings with Tiff end up in a comedy of errors. Come to think of it, when I’m with my other two friends, Suzanne or Kristin, it’s a comedy of errors as well. I guess I’m the common denominator to best laid plans gone awry.

Any-who, we decided to drive down to Aunt Patty and Uncle Tillo’s house at the beach in S.C. They happened to be out of town, so we had the place to ourselves. We planned to leave early from work to be on the road before dark. That didn’t happen, as both of us were late. But if we weren’t late, it wouldn’t be Tiffanie or me.
Since we left late, we had to drive at night, which neither of us enjoys, with a storm following us the entire three-hour trek.

Due to the severe thunderstorm on our heels our three-hour trip turned into five hours (Cue Gilligan’s Island theme song- “ A three hour tour…”). We dealt with the ever-present smell of sulfur due to cloud to ground lightening as well as heavy, heavy rain. To make it more clear how heavy this rain was we could barely make out the ungodly eyesore of Pedro’s giant sombrero. This landmark was the entrance to the birthplace of gaudy and all things “made in Taiwan”, otherwise known as South of The Border.

Deciding the storm was getting out of hand, we swung into the colorful vortex and parked at “Pedro’s hats from all over the world”. We made a mad dash inside with my longhaired Dachshund, Izzy, in tow. She came along for our beach getaway and was resenting me for it at this point. I didn’t want to leave her in the car, but feared they wouldn’t allow dogs in the store. However, it being South of the Border and all, the sign on the door said nothing about wearing shoes and shirts or no animals allowed, as most reputable stores do. It said only “ no firearms”. So the three of us, soaking from head to toe took shelter in the largest store of crap I’ve ever been in.

As we perused bins on junk, the power flickered and the windows started to rattle. Then the power went out and the threat of tornados became a real possibility. The sounds coming from outside were very loud and very scary, and I was waiting for the purple gorilla statue to be blown into one of the windows. To better shield ourselves, Tiffanie, Izzy, myself and staff went into the bathroom to avoid all the windows.

As we stood, wet and scared, I thought how ironic it was that I was on a trip to escape thinking about death and here I was possibly facing my own. I prayed that God would keep us safe, not just because I didn’t want to die, but because I didn’t want my obituary to say I died in a South of the Border bathroom.

Eventually, the storm weakened and we got back on the road. But, like a bad habit, the wind and rain returned for round two thirty minutes later. This was our plight and we accepted it as we were determined to get to the damn beach. We sang loudly and obnoxiously to our favorite songs in an effort to lessen anxiety stemming from the storm stalking us. Not wanting to stop, I fed Izzy in the car (note to self- don’t feed dog in car ever again as the stench of vomit in an enclosed vehicle, unable to open windows due to pouring rain- is so not worth it). When the rain eased off, we pulled over to a motel, not because we are quitters, but because we had to clean up vomit and walk Izzy. And because, nothing could be easy on this trip, I walked through a fire ant hill, which set my ankles ablaze.

We were an hour out from our destination and could sense salt water was near. Excitement suffocated our anxiety as we geared up for some rest and relaxation; thinking out loud about sleeping in and enjoying books by the pool. Minutes later we realized the salt water we were sensing might have actually been the flooding that was ahead of us. Tiffanie, a usually timid driver, decided if we could survive the threat of tornados with Pedro, we could handle a little bit of flooding. Cautiously she drove us through water that “ The Weather Channel” would advise you not to, as I held my breath. Like a champ (read lunatic), she made it to the other side.

Once we reached Myrtle Beach, we proceeded to get lost. This made me a little sad as I recalled the times (yes, plural) that Mom and I got lost here on route to their house at night. The worst time we had to pull into gas station because we were laughing so hard it wasn’t safe to be behind the wheel. We felt like complete morons and argued who would call my Uncle to tell him we were lost, again. I lost the coin toss but refused to call, choosing instead to get directions from a truck driver.

It was nearing eleven P.M. when my phone rang. I immediately said “ Oh shoot, I forgot to call Mo…” then stopped myself. Out of habit, I assumed she was calling to check I got to my destination safe and sound. It was Bobby checking on me. The amount of chaos we weathered to get to the beach that night was comical and Tiffanie and I shared more than a few laughs over it. However, those little moments snuck in to remind me, the happiness I might be feeling was only on the surface. If allowed to dwell too long on those thoughts or how I was really feeling, the smile would fade from my face. I chose to push the sad thoughts aside, because I missed how it felt to smile.

Pulling into their gated community, we realized my Uncle forgot to give us the code to get through the security gate. Since it was after eleven P.M., there was no guard to help us out. At that point, I just wanted to plow through the guardrail, but Lady Luck decided to take pity on us. A kind family, coming in late as well, gave us the code. Fortunate for us, we don’t fit the profile of criminals. We drove down the serene and quiet streets of the golfing community that would be filled with bikers and runners by morning. The multiple man made ponds were alive with sounds of frogs and fountains spilling over. This place always felt so peaceful and I couldn’t wait to be out of the car to enjoy it.

Our instructions were to look for the “flat” rock in the flowerbed close to the front door; underneath it would be the key. Picture two strange women, rooting around your neighbors yard at eleven thirty at night. Now we did fit the profile of criminals. We looked under every friggin rock and stone statue and found no key. Exasperated, Tiffanie looked at me, “ Are you kidding? We are finally here and we can’t get in!” I pondered my next move. Then, the neighbors outside light came on. I pondered a bit faster. I recalled there was a keypad on the garage and by some miracle I remembered that code. I’m assuming the neighbor felt we weren’t a threat if we had the code, since no cops arrived.

We brought in our multitude of luggage (for a two day stay) and took a collective sigh of relief, happy to finally be at our destination. I looked over at the kitchen counter to see the front door key. Unsure if Uncle forgot to put it out, or thought it funny to send us on wild goose chase. Either way, it was a fitting end to our heinous road trip.

There are always situations in life, big and small that teach us lessons. Maybe what we learned was, if you want something bad enough you will fight for it. Come hell or high water (or both in our case), we were determined to get to the beach.

Our weekend consisted of a lot of sleeping in (as we had hoped), lying by the pool, floating in the pool, talking and reading by the pool. We were sloths, pure and simple. When life gives you time to be a sloth, enjoy every minute without entertaining the feeling of being “ lazy”. If that nasty little thought weasels its way in, drown it with a margarita. Whenever we were upright, it involved shopping, walking on the beach or finding something devilish to eat.

Saturday after dinner, Tiffanie decided she had to have a tee shirt from the biker bar “ Suck, Bang, Blow”. It was a popular bar, known in part for its risqué name that apparently is in reference to what a motorcycle does. Since my knowledge of motorcycles is limited to them possessing two wheels and making road pizza out of people, I wouldn’t know. Tiffanie’s brother was into motorcycles, so she was hell-bent on getting him a shirt from this place. When we parked our SUV, next to a sea of Harley’s I thought, “maybe we should have checked if they had an online store.” I had a cautious gait walking up to the front door, though Tiffanie was marching full steam ahead, as if entering Sephora.

I’m not sure if I’ve ever felt as out of place and uncomfortable as I did, when the door shut behind me. Decked out in pastels and capri pants, we were Elle Woods and Bruiser walking into a sea of black leather and chest hair. Men looked up from their pool tables, women stopped sharpening their switchblades and a bartender dropped a shot glass. A hairy man in the back said, “ Hey sweetheart, this ain’t the mall.” My nerves may have conjured up a slightly exaggerated version, but you get the point. The seedy crowd took notice of us. Tiffanie and her rose colored glasses asked, “ You want to get a margarita?”

Bummed at my nervous nelly attitude, she walked through the haze of cigarette smoke to the retail section. I kept close to the door, eyes peeled for any nefarious action or person coming our way (I’ve seen way too many movies). Every time she found a shirt she liked she’d call out, “ What do you think of this one?” and I would respond, “ It’s great, lets go.” Eventually she said, “ Hey, you’re not even looking at the shirts” to which I replied “ And when you leave here without a knife wound, you can thank me.”

Once she purchased her souvenir, our J.Crew butts got back in our SUV and left unscathed. We returned to my family’s house to sit out by the pond. We drank homemade margaritas and discussed never leaving.

Hitting the open road and leaving our day to day lives behind was a breath of fresh air, even if for a few days. Grief would still waiting back home, but everyone dealing with a great void needs a break. There were definitely some stressful and anxious moments on our road trip, but the two of us hadn’t laughed as much as we did, in months. And laughter truly is the best medicine. 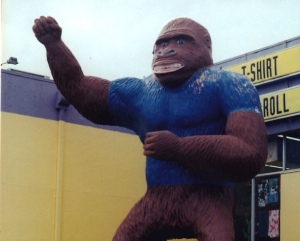